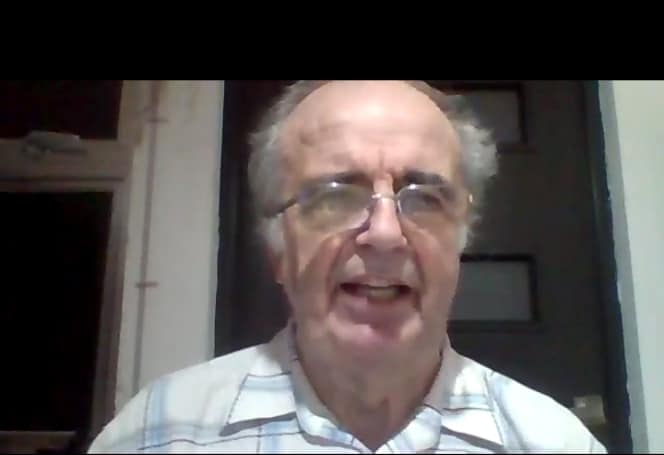 TURNER DECRIES FAKE NEWS, GIVES RECIPE
By Etete Enideneze
The recurring incidents of fake news, has been described as a serious menace to mankind and society, thus must be tackled head on.
Decrying the ugly trend, an education expert from University of South Wales, United Kingdom, Prof. David Turner, said fake news was not new to society but that, the situation is worst in the 21st Century, thus the plague of untrue news and those having the “syndrome” of peddling false information, need to be “vaccinated” like Corona virus patients.
Prof. Turner, spoke in a keynote address, delivered at the online conference of the International Society of Comparative Education, Science and Technology (ISCEST) December 1, 2020, stating that the abundance of information and free access to social media have encouraged spreading of false and harmful news.
He noted that the menace of fake news was everywhere in the world, and exemplified clearly in the Covid-19 pandemic as well as in politics, citing the contests between Donald Trump versus Joe Biden in the American Presidential election as another instance.
According to him, the Corona virus scourge which he dubbed as the ‘Metaphor of Fake News’ has provided a fertile ground for peddling of false information to scare people, a development he pointed out, has caused more harm to those incapable of identifying false reports.
The negative effects of churning out fake information on the social media, for selfish motives, were noticeable in the sharp decline in logical and rational contributions to discussions about politics and public affairs, Prof Turner posited. He added that this was despite the increase in number of educated citizens.
Miffed by the syndrome of fake news in a Post-truth Society, a phase coming after Information Society era, a phase in which the problem is not just about information overload, but concern about truth-telling, Prof. Turner has advocated some recipe among which are:
Self-consciousness in the use of social media, and creation/spreading of false, unverified, misleading or harmful information
Putting public interest above selfish interest in the creation and spreading of information
Developing and presenting information that would be genuinely informative and educative to audiences
Verifying information from more than one reliable source, and disseminating only factual and truthful news
Using reliable news sites and search engines to cross check news purported as factual, accurate and truthful information
Increasing the number of citizens with formal education, and who can discern fake or harmful propaganda –based information, and take critical stand against such messages. An increase in educated persons would dwarf the few uneducated persons who churn out falsehood or ignorantly believe fake news.
Retooling of the philosophy of education and curriculum to produce critical and rational beings that can evaluate ideas and information and take a stand, as well enhance quality in public discourse.
Prof. Turner’s keynote paper, elicited not just applause, but interesting comments from other participants at the ISCEST workshop.
Amongst the commentators were, Dr. Gertrude Shotte, an African scholar in professional studies from the United Kingdom, who stated that one reason for inadequate critical training in schools, was the kind of educational system bequeathed to the present generation of teachers, a system she argued does not inspire critical teaching and learning, perhaps due to rigid adherence to conventional knowledge.
Toeing similar line in her paper, Prof. Anne Mungai a Kenyan scholar with Adelphi University New York, pointed out that the structure of present educational curricular indeed impart some knowledge that appear questionable, or not in sync with African values, yet accepted without satisfactory answers.
She gave the instance of English Language which was inherited from the British colonialists as lingua franca in Africa, stating for instance that till date the question of which principle of grammar warranted calling a person who teaches, as teacher; a person who drives, as a driver, but a person who cooks is rather called a cook, not a cooker, is begging for answers.
The complexity of the English Language, she pointed out, has also made public enlightenment difficult in the rural communities of Africa, citing the case of Kenya where imparting knowledge of preventive measures and how to use face mask against Covid-19, was difficult to achieve.
On the use of communication technologies, Prof. Mungai took a stand that although it was a good development, the antisocial behaviours that online learning could encourage, needed to be tackled through media effects awareness campaigns to students, parental guide, as well as use of filtering mechanisms to block immoral contents.
Earlier, the founding president of ISCEST, Nigeria, Prof. Steve Azaiki, lauded Prof. David for the incisive and useful paper on fake news in the Covid-19 pandemic, and implored him to continue his good works in the academia.
Prof. Azaiki, described other papers delivered at the virtual conference as useful, to experienced and upcoming academics and professionals as well as students, assuring that the variousvpapers delivered at the conference would soon be available in the institute’s journal for wider access.
A minute of silence was observed in honour of late Chief Godwin Odumgba of Bayelsa State, Nigeria, for his support to the ISCEST while he was alive. Prayer was said for the repose of his soul. 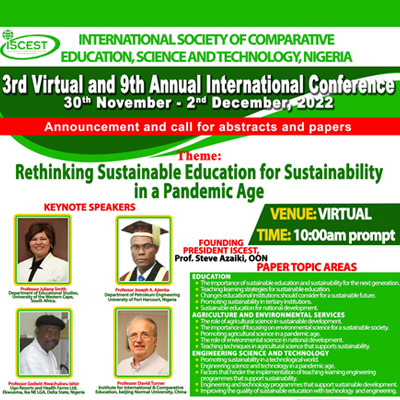 Excerpts from the 3rd Virtual and 9th Annual International Conference